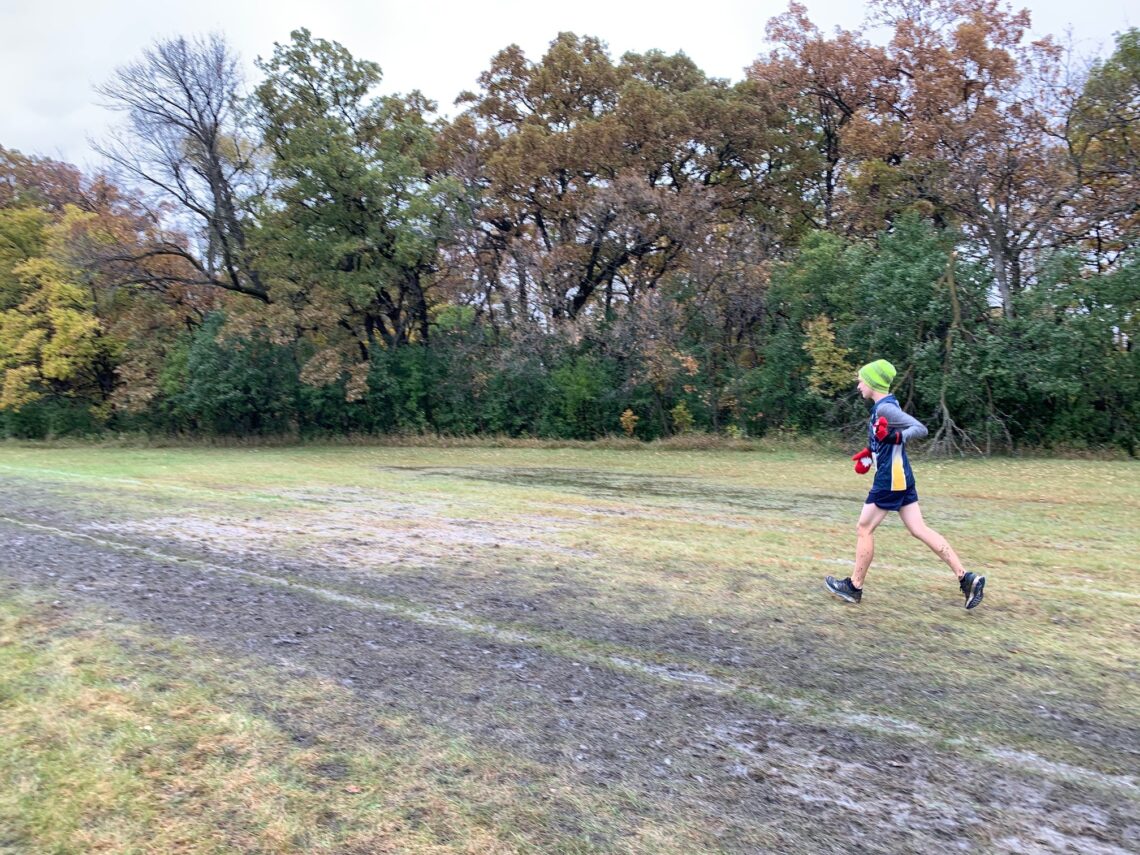 I don’t know why, but J’s XC season this year has been really off. To be honest, I hadn’t been looking too closely at J’s times this season–J and W missed a meet for my cousin’s wedding, W’s meet in Valley City got cancelled because of weather. EDC got pushed back from last Saturday (because of the blizzard) to Tuesday of this week. The kid’s last meet of the season, AC/DC got cancelled because of the EDC shuffle. It was a weird season. I felt as parents we were kind of just living meet to meet, and suddenly we found ourselves at the end of the season.

So when J walked his last few steps across the finish line at EDC (he ran the whole way, he just sort of stops every race and slows down right before the finish when everyone else speeds up) and I saw the timer say 29.01.26 for his 5K, I thought, “what the heck, J? That’s like a 10 min mile! (Yeah, I’m bad at mental math, that’s actually a 9:20 mile). That’s an AWFUL time for you.”

Yes, the weather was gross and cold. Mud slop everywhere. But I came home and looked up last year’s EDC time (which was also sloppy and cold) and J ran a 23.31 for his 5K (a 7:34 pace!). That’s almost 6 minutes slower from last year. I checked his last few 5K times from last year against this year and they too are significantly different:

See what I mean? This isn’t a few seconds or even a minute difference. It’s MINUTES difference. He is SIGNIFICANTLY slower than last year.

So what did this mama do when the kids had Thursday, Friday, and Monday off of school? This mama said, “kids, we’re all going for a run–TOGETHER.” I had talked to W about J’s lackluster season and asked her to help me out by trying to run as fast as she could and try to beat J. She was THRILLED to do it. So Thursday me, W, and J started out for our 3 miler. J was NOT thrilled. He wanted to run by himself, so the deal was that he could run by himself if he could run faster than us. And here’s the crazy thing: he couldn’t. Not because he was injured, but because he mentally and physically couldn’t keep up. We hadn’t gotten .25 miles into our run when he asked for “a break, and that this was too hard, and I want to just stop!” I hadn’t heard that kind of complaining since we first tried to get J into running during middle school. The first mile, W and I ran at an 8:19 pace with J trailing us, the second mile at an 8:46 pace (W dropped back and I kept pushing J to keep up with me) and at that point I decided we should head back home because I couldn’t maintain that pace and I couldn’t afford to have J see me drop back my pace more than that (Monday–the last time I had run that week–I ran a 9:20 mile. I’m not as in shape as I was when I was running with J every day.) J whined and complained the whole way. I told him whoever made it home first got the Gatorade. He finally stepped it up and beat us home, but he wasn’t happy about it. I asked him at the end if he still liked running and he said, “sometimes.”

What happened to the kid who six months ago told the reporter for the Inform, “I like running because it’s good for my energy?” That kid LOVED going out for a run. You could tell he craved running. I realized Thursday that his run that morning was like most races this XC season. He did it because he had to, and complained the entire time doing it. His head and heart right now are not in it.

Which sorta breaks my heart, because he’s worked so hard and come so far with running over the past few years. Yeah, the competitive me has her panties in a bunch over the drastic change in running times, but the mom me is disappointed because I saw how much joy running has given him. I see how much joy he gets from socializing with the other boys. But this season he’s just not feeling it. What gives?

I’ve gone through some theories this past week, but who knows if any of them are right:

-Does he miss the senior crew from last year? Those boys have been such a big part of his his running experience.

-Did the “time out from XC” mess him up somehow?

-Was the mixed up schedule a factor?

-Was it because this summer we’ve given him a lot more freedom on how to spend his free time and because I wasn’t pushing him to do things every day, did he lose his inner drive and self motivation for other things, including running?

-Is he depressed? (One of the symptoms of depression is losing interest in things you once loved)

-Is he bored with it? (Since he doesn’t have personal goals for times like the other runners on his team, does that affect his drive to do it?)

-Since we’ve eliminated fire drills from his life, does that absence of extreme anxiety affect his energy and drive in running?

As you can see, I’ve thought of a million different things and have no good answers.

Friday and Saturday J, W, and me all ran together again. Yes, I am using sibling rivalry to my advantage and I feel no shame for it. W is totally up for it–if she thinks she can beat her brother, she’s up to it. And J isn’t about to lose a Gatorade to his sister. Friday he ran 8:36, 9:25, 8:53. Saturday he ran 9:02, 9:13, 8:38. I’m trying to think of ways to spark the love again. We’re charting J’s runs every day. We’re talking about times (small numbers mean good times, big numbers mean bad times, and I’m having him identify which mile he ran best that day). I’m playing with ideas like, “If you can get 8 minute miles for every mile, you get to pick a place for dessert.” (He ran Today he ran 8:07, 8:37, 8;58 when I told him if he could get every mile in the 8 min range, we could go to Sonic). I’m hoping we’ve just hit a funk, and that getting excited about running numbers (because this kid can get excited about numbers), running as a family, and doing some weight training at home can help get him motivated again. I asked him if he wants to do winter running with Coach M (I told him he didn’t have to if he didn’t want to), and he told me emphatically that he wants to. We have a month and a half until that starts, so in the mean time, we’ll just keep running every day and hope to get him closer to where he was at last year!

Any motivational ideas or great running apps or progress trackers, send them my way!

Wish us luck! (Especially me. I’m SO out of shape right now!) 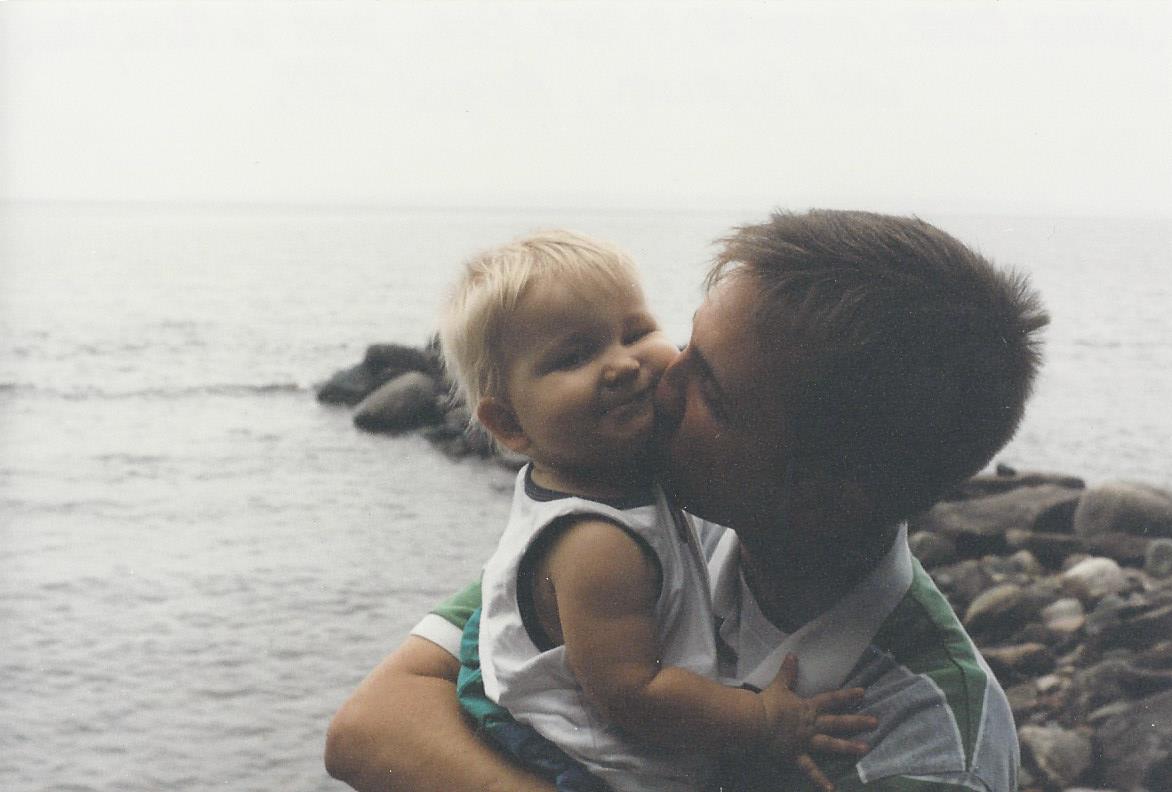 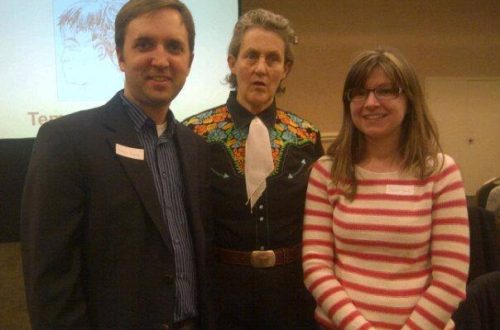 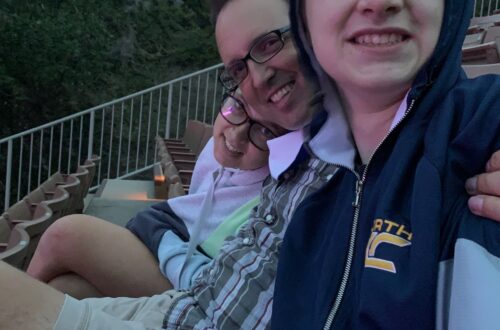